Today’s Museum Monday treasure from the collection of the Museum of American Glass in WV doesn’t even look like it is made of glass. And sometimes when we give tours of the Museum we ask a trick question: What pieces of glass in the collection came from the furthest away? This one. It traveled to outer space and back again. It is a Space Shuttle Columbia insulation tile, manufactured by Lockheed Missiles and Space Company. The tile is made of ceramic bonded silica fiber with glass coating. This Space Shuttle thermal insulation tile was removed after being damaged on an early flight of the Space Shuttle Columbia in the 1980s and was used on either the upper forward fuselage or the underside of the Shuttle. Oral history says that we were able to obtain this tile, which flew in space on an early mission, from Senator Robert Byrd, when he was Senior Senator from West Virginia. However, institutional memory suggests that it was Dr. Daniel Farnsworth, of Weston, WV, who had a friend who worked for NASA and was able to acquire the tile for us. During its 22 years of operation, Columbia was flown on 28 missions in the Space Shuttle program, spending over 300 days in space and completing over 4,000 orbits around Earth.

Visitors are amazed when they pick up this tile at how light it is. It is a very porous material and definitely not like the brick it appears to be.

We have one other very special piece relating to the Space Shuttle. It is a hand-crafted wooden table with a glass top. The top is a Space Shuttle window made by Corning Glass Works in Canton, NY, by AFGWU Local Union 1026. The glass is 1/2 inch thick. The table was made by Paul Barney, a pattern maker in Local Union 1000, Corning, NY. It was from the office of the president of the American Flint Glass Workers Union, originally displayed in their Headquarters Building in Toledo, Ohio, and donated by Tim Tuttle, the last President of the AFGWU before it became part of the United Steelworkers Union. 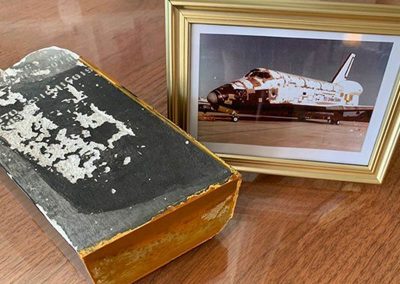 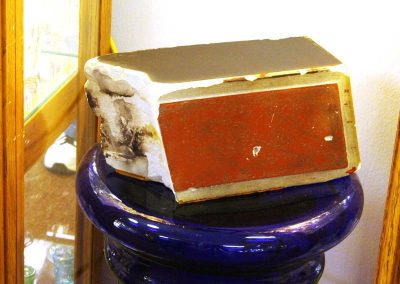 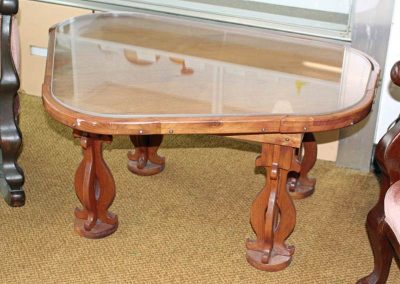