In September 1991 members of the British Marbles Board of Control were invited to attend and play in the National Rolley Hole Marbles Championships, which were held in Standing Stone State Park, Tennessee.

While we were there we were invited to visit a number of homes, some of which had their own “Marble yards” and other venues like the “Monroe County Marble Club Super Dome” in Kentucky. One of our trips was to Malcolm Strong’s marble yard, in Moss, Tennessee; here we were shown the process of producing local ‘Flint’ Marbles. 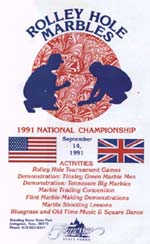 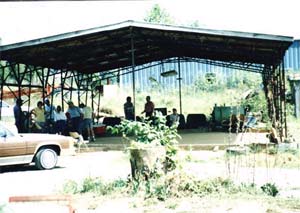 The hand made marbles of local ‘Flint’ which is a silica-based mineral like quartz and obsidian, is found in many colors, each shade has its special characteristics:

Flint marbles from my collection.

My friend, Travis Cherry, told me that the color varies from white to yellow and sometimes a reddish color and this is just down to personal choice.

My wife Julia was on hand as official photographer for the trip and took all the pictures in this article.

The marble maker looked around to find a suitable piece of ‘flint’ to use in making the marble. This was then knocked into a rough cube shape ready for the main work to commence.

The initial shaping took place on a mobile diamond-grinding wheel. At first it was held by hand until the uneven corners are ground away. When the flint was too hot to handle it was held in a pair if stillsons until the marble maker was happy that it was ready for the next stage in the process.

The coarse flint was then turned into a sphere using a rubber wheel on the other end of the grind-wheel and a carbarundum stone, which had half a spherical hole in it. Once the flint was rounded and to the right ‘shooting’ size it was polished in much the same way as above, but using a block of sandstone instead of carbarundum.

At this stage the polished sphere looked ready for use but there was to be one more operation before the marble was finished. While still quite hot it was dropped into a can of old motor oil. After a few minutes it was removed, having a wonderful satin feel. The last picture shows the finished marble which I still have in my collection and yes it still has that wonderful satin feel to it.

There were two different marble makers. One was Calley Strong the son of Junior B and the other was Kent Smith. They both used a grind wheel mounted on a board that was kept in the back of a pick up truck. I have seen other demonstrations where there have been guards on and around grind wheel but I feel that what I saw was the old way and it was good to see a living tradition being practiced. 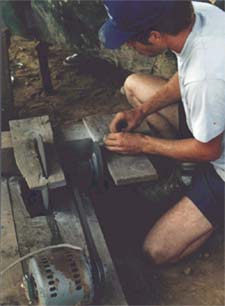 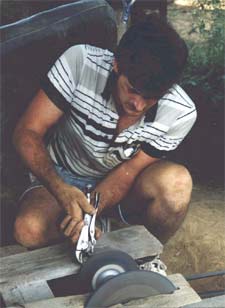 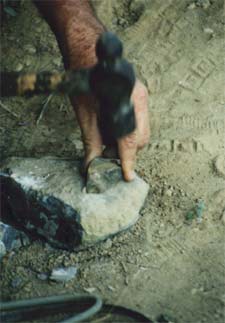 The flint is knocked into a cube. 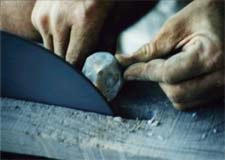 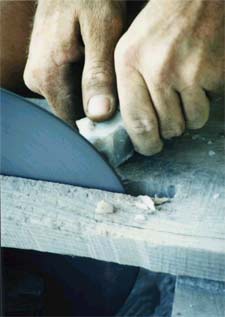 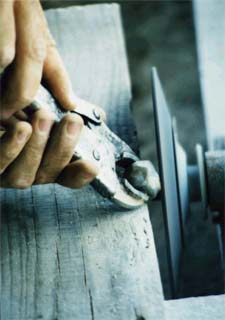 Images 4 & 5 show what happens when the flint gets too hot to hold. 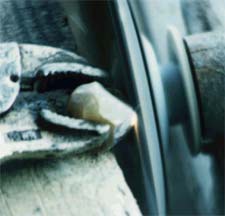 You can see the red hot glow where the flint meets the grind wheel. 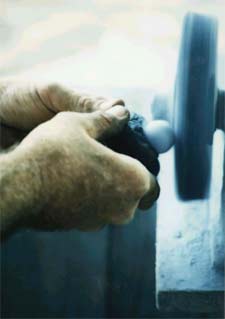 The rough sphere is rounded in the carbarundum stone. 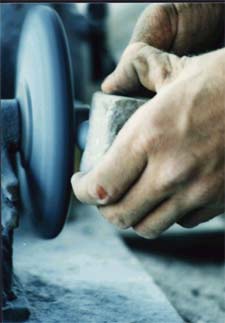 The flint marble is polished in a sandstone block. 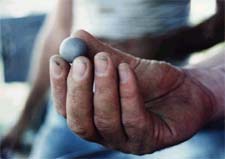 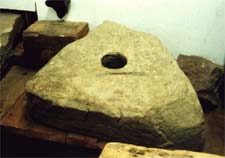 While Julia and I were in Tennessee in 1995, Bobby Fulcher took us to an old-time music festival at the ‘Museum of Appalachia’. When we were looking around the exhibits we came across an old sandstone rock that had a marble-like hole in it.

The caption read “If one places a small rock in the hole in this stone, and if the large stone is under a waterfall or rapid stream, then the small stone will ‘bounce around’ inside the hole, and after 3 months will be worn into a round marble.”

There was also a jar of marbles that were made in the mill.