A History of Glassmaking in Lauscha, Germany, and Vicinity

By B. Alan Basinet 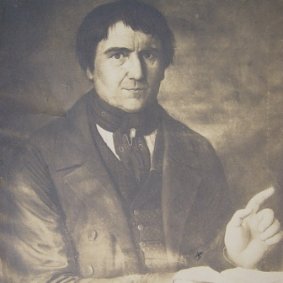 Lauscha is located in the Thuringen province of East Germany. This small town has a history of glass making that goes back at least seven centuries. Nuns and monks were among the earliest to operate glassworks in the region. These glassworks, Glashutten (or “glass huts”), became more numerous as secular residents of the region acquired the knowledge of glass making which was at first exclusive to the church because of its members’ ability to read Latin, the language in which the ancient glass making recipes were written.

By the early 1400s the glass industry in the region had become well-established and became a tradition passed on from father to son. One of the premier families of glass makers was the Greiner family, and it was their descendants who would produce the first glass marbles.

Lauscha itself was a large, uninhabited forest district until around 1590, when two glassmakers, Christoff Mueller and Hans Greiner, came to the region from Langenbach and erected a glass factory in Marktiegel. However, this factory lasted only a few years due to cramped space. They then settled on the banks of the Lauscha River, licensed to do so by the Duke of Sachen-Coburg, Johann Casimir. The site of the subsequent glassworks they built there, Hultenplatz (“foundry place”), is still known by the same name today. Soon thereafter these two were joined by other glass artisans, and their glassworks swiftly became a source of fine luxury vessels used by the aristocracy. Ointment flasks were among the first objects produced by the glassworks, followed by drinking glasses and small round window panes called “blisterpanes” and “bullseye panes.”

The location was favorable for glassworks because timber could easily be dragged down from the nearby mountains, thus supplying the factories with much needed wood for the ovens. For instance, data from a later factory indicate the need for over 2,000 cubic meters of timber each year. Raw material was also abundant. Sand from Steinheid and burned volcanic limestone from Weissbrun were used in the glass formula. The glass had a greenish color due to the high amount of iron present in the sand. Thus, it was named Waldglas (“forest glass”).

Hans Greiner and Christoph Muller were also accomplished painters and therefore painted their glass items with Christian passages and, later, humorous passages and folk poetry. These were sold almost immediately upon their completion and were distributed throughout the country by peddlers.

The demand for glass was greater than the supply. To meet some of this demand, the sons of Christoph Muller, Hans and Steffan, built their own glassworks in Schmalenbuche in 1607, obtaining 1,155 acres of forest for the needed firewood. Around 1622, another factory was founded in Piesau, by a fellowship of glassmakers including Scholt from Langenbach, Heins from Langenbach or Fehrenbach, Bock from Lauscha, and Dietz from Seiffen. Other glassworks were built in Klein-Tettlau (1680), Gebiet Altenfeld (1648), Neustadt (1698), and Krumbach (1615) during this century.

The Krumback factory endured until 1783. It was founded when, due to an abundance of timber in Frankenwald, Hans Greiner and Christoph Muller proposed to erect a glassworks there, negotiating with the local ruler to do so. This factory produced plate glass and drinking glasses and goblets, and rapidly expanded throughout the eighteenth century. In 1783 it was sold to Johann Michel Muller. Later, in Marktiegel on the same location as the first glassworks, two factories were constructed in 1721 and were named Henriettenthal. Here, a method by which to produce stemmed glasses was introduced to Germany, a technique earlier developed in England.

By the late 18th century glassworkers began working out of their homes to handle the overflow from the glassworks, which were operating at capacity. Around this time, the use of oil lamps and, later, gas blowtorches, allowed for increasing intricacy and creative designs. Other smaller “wandering” glassworks were also erected in areas where timber could be exploited. Once the forest in the vicinity was depleted, these itinerant factories were moved to new locations, leaving behind few traces.

A glassworks was established in Marktiegel by Elias Greiner Vetters Sohn in 1853. Louis Robert Greiner also constructed a factory nearby in 1856. The latter was reconstructed in 1895 and supplied with gas heating, but was finally closed in 1934. Also in 1856, a glassworks was founded in Lauscha by two brothers, Peter and Christoph Kuhnert. Here they produced glass marbles, glass canes, and reflective colored glass balls and knobs. This factory endured until around 1916. In 1861 the factory of the Kuhnert and Company Firm was founded by Gunter Kuhnert and his sons. Finally, in 1920, another glassworks was established in Lauscha by Johann Georg Schneider.

During the 1800s, as mentioned, Lauscha glassblowers began creating children’s glass toys. Among these were the first glass marbles, made possible by the invention of marble scissors by Elias Johann Christoph Simon Carl Greiner around 1846. However, the scissors were initially used for making glass eyes for toy animals, and the first marbles were not produced until around 1850. Other items produced during this period included thermometers, barometers, artificial eyes, glass beads, and Christmas tree ornaments, among others.

Marble scissors allowed the marble maker to cut portions of a multicolored, threaded glass rod which was heated then twisted as the glass became molten. Shearing the glass rod left telltale cut-off marks, or “pontils,” on either pole of the marble. Depending on the amount of time and effort invested in the production of the marble, as well as the skill and dedication of the artist, these pontils were often melted, ground, or even left as is. There is research to suggest that the earlier marbles have more polished and ground pontils, and that less care was given to this as time passed due to increased production and a concomitant decrease in the amount of time that could be given to the creation of an individual marble.

Apparently, Elias Greiner Vetters Sohn, stepbrother of the inventor of the marble scissors Johann Christoph Simon Carl Greiner, and son of master glass worker Johann Georg Wilhelm Greiner, was the first to make glass toy marbles in 1849. Along with his son, Septimus, or Seppen, Elias was granted a six year patent from the county government of Meiningen in September of 1848 to manufacture marbles. In May of the following year the father and son team received a similar patent from the Bavarian Ducal Ministry; one year later it was confirmed that the two were indeed manufacturing the marbles, a requirement in order to maintain the patent.

Elias and Seppen began by producing their marbles in a small portion of the family glassworks. The marbles were polished elsewhere. In September of 1853, however, the two succeeded in opening up the first glassworks devoted to the manufacture of glass marbles. Elias ran this glassworks until his death in 1864 and was succeeded by his son, who died in 1877. Control of the glassworks then passed to Seppen’s son Hermann. A gas explosion in early 1894 unfortunately burned the factory to the ground, but it was replaced with an even larger glassworks the following year. After Hermann’s death in 1914, his son Otto became the last of the Greiner family to run the glassworks. At some point the factory was producing not only the traditional handmade marbles, but also machine made marbles. Both types of marbles may have been produced at this glassworks (“Seppenhutte”) until World War II. Both handmade marbles and “German Striped Transparent” machine made marbles have been dug from this site.

Soon after the Greiners opened their factory, numerous other glass toy makers in Germany began specializing in marble making. The first recorded instance of an exhibition of these marbles was in 1854 at the Universal German Industry Exhibit in Munich.

At least five glassworks were operating in Lauscha: Kuhnertshutte (begun in 1856 by Peter and Christoph Kuhnert); Schlotfegerhutte (begun by Luis Robert Greiner in 1853); Seppenhutte; Schneidershutte; and Dorfglashutte. The latter can trace its history of glass making to the year 1597. Other glassworks producing marbles were in Steinach (Eichhornshutte) and Haselbach (Marienhutte).
At first, German glass marbles were too expensive for most American children to enjoy, and archaeological excavations of working class residential sites dating to the latter half of the nineteenth century demonstrate that less than 5% of the marbles recovered were made from glass, with the balance composed of the more common, and far less expensive, ceramic and stone marbles.

The following few decades witnessed the emergence of glass marble manufacture in other countries, including England (Bristol Glass Works) and America (Iowa City Flint Glass Manufacturing Company). However, most glass marbles were still imported from Germany, though this importation was virtually halted in the early 1900s when M.F. Christensen of Akron, Ohio, patented the first marble making machine. However, it was the advent of World War I and the Fordney-McCumber Act tariffs to follow that proved the death knell of German handmade marble importation to the United States.

There is evidence to suggest, however, that some German glass marbles were still making their way to the United States after the first world war. For instance, the Butler Brothers 1927 and the Sears Roebuck and Company 1921-1923 catalogs illustrated imported glass marbles, though it could be argued that they were selling old stock or simply picturing marbles that were different from what were actually being offered. More conclusive proof of the continued importation of German glass marbles derives from the German toy catalog, der Universal Spielwaren Katalog, of 1924-1926, which shows that latticinio swirls cut from a cane were still being offered for export.

In fact, there is good evidence to support the fact that, at least in Lauscha, glass marbles were being made by hand in quantity until 1933. The onset of World War II slowed this production considerably, but glass artisans may have continued cutting marbles from glass canes until 1950, allowing this particular craft to flourish a full 100 years.

It should be noted that while the production of handmade glass marbles as toys ended by the end of the first half of the twentieth century, a renewed interest in them by collectors in the succeeding decades brought about a rebirth of sorts. In the past decade or so, more and more modern glass artists have begun to produce handmade marbles as art glass pieces. This trend is growing, and shows no sign of declining. While some of these artists are producing new styles completely different from traditional cane-cut marbles, others are orienting their craft toward reverent reproductions of the old styles. In fact, in Lauscha and the surrounding vicinity of Germany, many glass workers are currently producing contemporary marbles by hand. Most of these marbles contain goldstone, and while some are cut from cane, others are hand gathered. Some of these artists can trace their ancestry to the first glass workers who came to Thuringen so many centuries ago.

The Dorfglashutte Glassworks in Lauscha 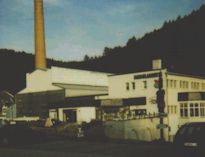 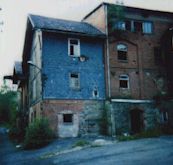 The Kuhnertshutte Glassworks in Lauscha

The Eichhornshutte Glassworks in Steinach

THE MARBLE MUSEUM wishes to thank B. Alan Basinet from contributing this article and pictures for use in our website and the museum.