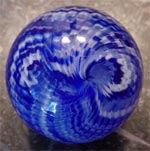 A Century of Tradition

WNIT Public Television produced a wonderful documentary on the story of the St. Clair family of Elwood, Indiana, whose tradition in their hand-crafted art spans over 100 years. Brenda Bowyer, producer/director of the film used the four marbles Joe Rice donated to The National Marble Museum organization in the documentary. It was wonderful to see marbles displayed in a glass documentary as an important art form.

The documentary House of Glass: A Hand Crafted Tradition premiered on PBS March 7, 2002 during their pledge week. Joe Rice’s story of the St. Clair Family’s history of hand crafting glass is fascinating. It is also a story of inspiration and the American dream.

Joe Rice is the great-grandson of John St. Clair, a glassworker who immigrated to Indiana from Alsance- Lorraine, France. The discovery of abundant natural gas in 1887 and the availability of sand in central Indiana made Elwood a thriving center for the glass industry. Many European glassworkers like John St. Clair came to Elwood to work in the new glass houses.

John St. Clair passed the craft on to his son John B. (Pop) St. Clair. Pop began working for the MacBeth-Evans Glass Company in Elwood where he discovered his passion for making paperweights. Pop often worked after hours perfecting his craft, which he taught his five sons. By 1937 the MacBeth-Evans plant closed and Pop and two of his sons went to work at a glass house in West Virginia. In 1938 Pop’s son Joe started St. Clair Glass and was joined by Pop and his brothers Bob and Paul three years later. By the age of 16, Joe Rice’s uncles Joe and Bob had taught him the craft of making paperweights, which made Joe the youngest paperweight artist in the country.

In the 1930s and 1940s hand-crafted glass paperweights and vases were considered novelty items. It was not until the late middle of the Twentieth Century that the studio glass movement created an interest in glass as an art form by collectors. Early pioneers like Dale Chihuly and Harvey Littleton’s inspirational art glass brought the craft as an art form to new levels. Today, master gaffer Joe Rice continues the St. Clair tradition with The House of Glass in Elwood, Indiana which Joe’s uncle Bob originally operated as the St. Clair House of Glass. Tom St. Clair is also continuing the family tradition in nearby Anderson, Indiana, with Tom St. Clair Studio Glass.

Joe Rice’s glassmaking process is essentially the same that his uncles and grandfather created using a five-member team. The process starts by taking time to mix their crystal batch for 3+ hours using a cement mixer. The ingredients for the glass batch are silica sand, limestone, sodium ash, and feldspar. The batch is placed into the furnace for 24 hours at about 2600 degrees. For color, Joe uses cullet form the nearby Kokomo Opalescence Glass Company. The cullet is ground and screened in 350-LB units and used for decorating his art glass. Many of the tools used by Joe Rice’s team were made by his uncles or were made at the old MacBeth-Evans Blacksmith shop in the 1920s.

Elwood, Indiana’s large glass houses disappeared with the depletion of natural gas in the 1930s. The famous MacBeth-Evans Glass Company – which invented oil tempered glass – was sold in 1937 to the Corning Glass Company of New York. The nearby Kokomo Opalescence Glass Company in Kokomo, Indiana has survived. The Company is the oldest opalescence glass manufacture in America and once sold its glass to the famous Louis C. Tiffany Company. What is thriving today in the Elwood area is the studio glass movement. There is an annual glass festival held there every summer. Joe Rice’s House of Glass and Jeff and Carol Ball’s Prestige Art Glass Studio are both great places to visit. See Elwood this summer and discover the fascinating art of hand crafting glass.

The Museum of American Glass in West Virginia wishes to thank Joe Rice for donating to The National Marble Museum Collection. His unique designs are now part of the marble display.

We would also like to thank WNIT public television for sending us a copy of the Joe Rice documentary.
When you are in Indiana, Please take time to visit him: