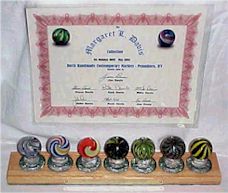 The Margaret L Davis Tribute Collection (#91 of 100) was donated by the Davis family. The set includes a handcrafted and signed art glass marble made by Jim Davis and each of his six sons. The set also comes with an official certificate signed by each artist. The set is now part of the permanent collection of The Marble Museum at The Museum of American Glass in West Virginia. Jim Davis’ art glass marbles are found in many of the finest private art glass collections throughout the United States.

JIM DAVIS AND THE NEXT GENERATIONS 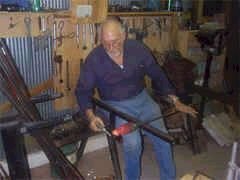 Jim Davis, born in 1930, began to work at the Mid Atlantic Glass Company at the age of 16 making stemware and other types of glass. He quickly learned each phase of glass making and used his spare time to make glass animals, paperweights, and other glass items. He began taking some of the glass home with him where he would etch different patterns onto the glass. He started this business at home in 1967 and by the middle 70’s he opened a gift shop in the town of Pennsboro, West Virginia. In 1990 with advice from other glass artists, he began making contemporary art glass marbles. By 1991 he had his own glass studio built and from there was so busy filling orders, that he retired in 1992 and started making marbles full time. He enjoyed traveling to marble shows and met a lot of wonderful people. In November of 2000, Jim suffered a severe stroke that paralyzed him on his left side. He spent many weeks in the hospital and several months in rehabilitation. He is walking with a cane and does have movement in his left arm. It is not known at this time if he will be able to work with glass again but he sure is motivated to do so.

In the 1990s, his sons watched and worked glass at his glass studio making marbles and other handcrafted glass objects. Dad liked to teach the art of working glass to his sons and always seemed to be a step ahead of new ideas. Whenever the boys thought they had come up with something new they discovered that dad had already done it.

Jim Davis asked his sons to continue the business he started many years ago. It was decided that while he recuperated, the business would go on. 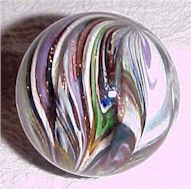 Steve, the oldest son had been helping dad with marbles and other glass items since the early nineties. He has spent much time in the studio as many of the other sons learning the different techniques dad used in making marbles. Steve has worked many years in an automotive plant and is the first son to retire early and work full time making contemporary art glass marbles. 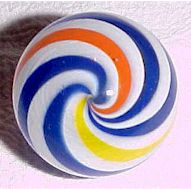 Rick, the second oldest, began his glass career with the Mid Atlantic glass company in Ellenboro, West Virginia. Not only is working glass his hobby but it is a full time career for Rick. 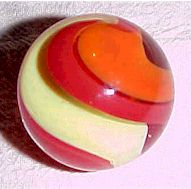 Mike, son number three, works for a national window manufacture. Mike has also worked with glass making at the studio since the early nineties. Mike is the originator of the “Davis Peacock” marble. 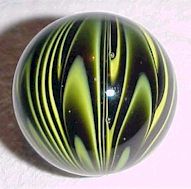 John, son number four, also works for a window manufacturer. John has made a few art glass marbles over the past years but has been working more with glass over the last few months. 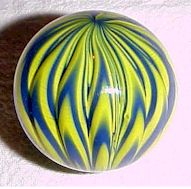 Mark, son number five, also works at the same window factory as Mike and John. He has spent time working in the studio over the years and has been. spending more time lately developing his marble making skills. 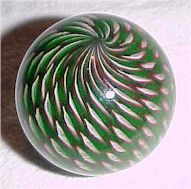 Joe, is the youngest son. He currently works for a window extrusion plant. He has also worked in the studio on and off over the years but more over the last several months. 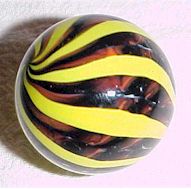 Each and every son followed their father’s footsteps and began their career working with glass at the Mid Atlantic Glass Company. Now the sons are following their father’s work at the Davis Glass Works. Jim Davis continues to teach his sons the finer points of glass making and design.

None of us would be where we are today of course with out the help of our mother, Margaret L Davis, for whom the set contributed to The Marble Museum is named. We decided early on that a collective contemporary marble set would be dedicated to her as a Thank You from the entire family. The set contains one marble made by dad and one by each son. It’s sure seems like a small tribute to the wife of a marble maker and a mother of six ornery boys. Dad will continue to teach marble making and mom will teach us the business side of the hobby that is already being pasted down to the third generation with Mike’s son Jeremy.

The Museum of American Glass in West Virginia wishes to thank the Davis Family for donating to The National Marble Museum Collection. These unique designs are now part of the marble display at the Museum.