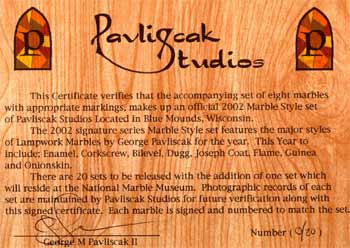 Pavliscak Studios is a specialty workshop focused on creating the best in quality marbles, unique beadware, and stain glass lamps. Located in the quiet little town called Blue Mounds in the countryside of southwestern Wisconsin, it produces some of the finest in sophisticated glass artwork to be found nationwide.

George Pavliscak, one of the foremost stained glass craftsmen in the Midwest, created the studio. The quality of his work is far superior to the majority of mass-produced marbles and stained glass products being sold retail. Every element of each creation is carefully chosen to work with the image being created. Extra attention is put into the structural integrity of George’s products to make them last far beyond the lifetime of less quality products.

George was raised in Michigan in the suburbs of Detroit. At the age of 15, his father introduced him to the art of stained glass craftsmanship. George received some formal education at Eastern Michigan University, where he studied chemistry and biology, but somehow got his degree in Earth Science and Cartography in 1991. Though all of these years, he continued honing his glass art, and moved to Wisconsin in 1992. Upon arriving in Wisconsin, George went through a three-year apprenticeship under one of the premiere artisans in the field where he delved into the exacting art of making Tiffany style lamps and windows. Pavliscak Studios first opened in 1994 on the Eastside of Madison, Wisconsin, as The Wood & Glass Company. George’s initial creations were mainly of wood, but his schooling in stained glass also played a part in the items he made. Soon thereafter the Company switched almost entirely to specializing in custom stained glass windows, lamps and gifts, as well as providing stained glass supplies to hobbyists. For many years George conducted his retail business, attended weekly art and craft shows, and became a colorful permanent fixture of the Madison Farmer’s Market. In 1996, George had begun lampworking, making beads and marbles as a diversion from larger stain glass projects. Mostly self-taught and, through trial and error, he developed his own unique approach to lampworking. In 1998, after 2 years of study and practice on the subject, he began selling his lampwork beads and marbles along with his other handmade glass items. After the birth of his first son, George wished to spend more time close to his family and closed his retail location in Madison. In 1999 he built his studio in Blue Mounds, about 30 minutes west of Madison. His studio was many times the size of his first store and this allowed George more freedom to create — where the store required maintenance and time to manage employees. During those same years, he studied briefly with John Hammon Miller to enlarge his marble and paperweight craft. George continues to do shows 20-30 times a year, and does a large part of his selling on the Internet, through mail order, and of course, by appointment at his Studio.

Other interests: George plays clarinet, and classical and electric guitar, and has been in several musical groups. Portable Shrine, The Groove Biscuits, Arm of Slug and Sixteen Inch Solution. Computers have also played a large part in his life. In the days before the advent of the Internet he ran a computer Bulletin Board Service (BBS) for four years through which he met his wife Barbara. George plays soccer and founded the Soccer Hack Coed Futbol club in 1998, which he continues to actively manage.

The Museum of American Glass in West Virginia wishes to thank George Pavliscak for donating to The National Marble Museum. His unique dazzling designs are now part of the marble display. 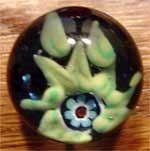 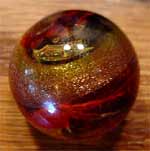 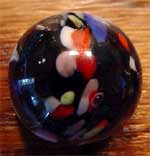 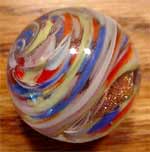 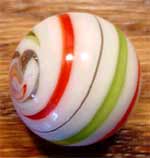 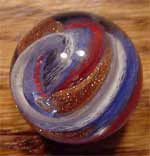