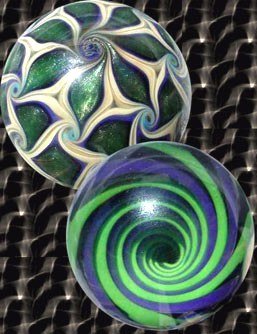 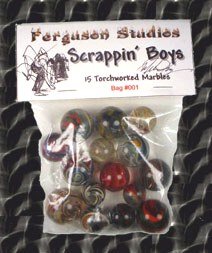 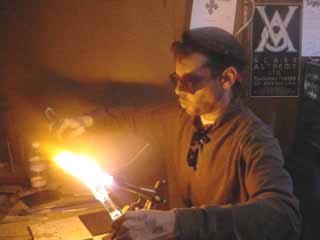 Douglas M. Ferguson was introduced to torchworking in the summer of 1997. Since then he has developed his skills with Borosilicate Glass through a playful spirit of experimentation and energetic curiosity. This has inspired a wide range of art including Sculptures, Goblets, Blown Vessels, Beads and Marbles. Douglas still loves to make glass come alive in many forms but he has found great happiness in marbles.

Douglas has been a featured Artist in several books and websites. His artwork has also been displayed in public and private collections throughout the world. The “Inside – Out” marble design style is attributed to Douglas Ferguson.

One of his students is his wife Melissa L. Ferguson. Melissa’s diverse talents range from photography, customer relations and making marbles. This husband and wife team makes up Ferguson Studios

The Museum of American Glass in West Virginia wishes to thank Douglas and Melissa Ferguson for donating to The National Marble Museum his unique designs are now part of the marble display.