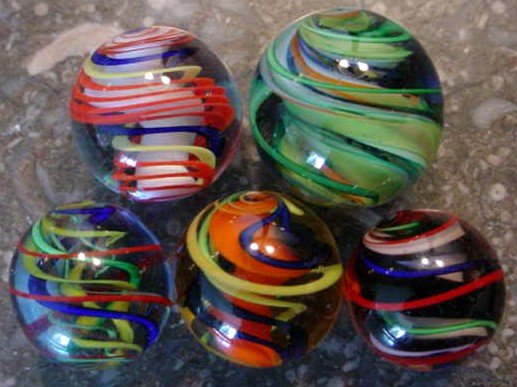 Ashley Genovini was born in 1981 in Santa Maria, California. She spent most of her childhood years in Arroyo Grande, California. At the age of fourteen she became very interested in the art of hot glass. When she was sixteen, she got to experiment with making beads for the first time. After that, she knew she loved hot glass and would make glass art a career.

When she was nineteen, she was fortunate enough to apprentice under John Hamon Miller, a third generation glass worker, who specialized in making marbles. After a year and a half apprenticing under John, she could create marbles and paperweights of her own style. Ashley has also worked with various glass artists including Will Carlton, Rob Livezly, JR Grossman, and Francis Coupal.

Ashley is continuing her study of glass under a glassblower in Ohio. Although her goal is to create one of a kind functional blown pieces, she will always make the glass orbs that she loves so much.

The Museum of American Glass in West Virginia wishes to thank Ashley Genovini for donating to The National Marble Museum. Her colorful swirl designs are now part of the marble display.