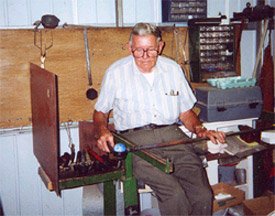 Marbles are His Greatest Passion

Andy Davis discovered his true passion in life at the age of 72 and became a studio glass artist. He is an inspiration for anyone entering the studio art glass movement. “Marble making is a kind of art that requires a high level of precision.” Making marbles has become his passion. The Marble Museum organization was fortunate to receive some of his well-crafted art glass marbles.

Andy Davis contributed one of his MT. Rushmore sulphide sets to The National Marble Museum Collection. Each art glass sulphide marble measures 2″ in diameter and celebrates one of America’s greatest monuments. The set includes an ornate pressed glass stand for each marble.

Andy Davis was born in Harrisville, West Virginia in 1926. In 1943, at age sixteen, he began working for the Mid-Atlantic Glass Company. In 1956 at age thirty, Andy moved to Ohio and began working at the Republic Steel Company in Warren, Ohio. He retired in 1990 and started traveling to marble shows around the country with his brother Jim Davis, of West Virginia, whom he credits as the artist in the family. In 1995 Andy built his own furnace and made his first marble. He works in the antique style, making contemporary sulphides, clambroths, and a variety of solid core, latticino, dichroic and mica flake marbles to name just a few. He also makes glass-spinning tops that are very popular and keep him very busy.

The Museum of American Glass in West Virginia wishes to thank Andy Davis for donating to The National Marble Museum. His MT. Rushmore set is now part of the marble display.
Come see us in Weston, West Virginia