Today’s Museum Monday treasure from the Museum of American Glass in WV is an atypical example of the Morgantown Glass Guild’s mid-century modern period. Morgantown, at that time, was known for the very simple and clean lines of its products, primarily enhanced by the brilliant colors of the period. This pitcher certainly has the color – called moss green by Morgantown in their take on the ever-popular avocado green from the 1960s and 1970s. What is atypical about their No. 2007 Seville martini pitcher is the intricate paneled motifs, which are the chief design elements, as compared with the much sleeker use of optics and very plain shapes found in the company’s earlier Décor line barware. And this becomes explicable when you look at the dates of production for Seville: 1968-1969. This follows the purchase of Morgantown by the Fostoria Glass Company just a few years before and the beginning of what many collectors consider the death knell of Morgantown. As Jerry Gallagher, author of A Handbook of Old Morgantown Glass, bluntly put it: “The successful good taste and simplicity of design which characterized J. Richard Haden’s DÉCOR Line were cast aside, replaced by ponderous concepts from Fostoria designers who were not able, or at least did not make an effort, to emulate.” I won’t get into the politics of whether the sale to Fostoria was a disastrous decision or not, but I will disagree with Mr. Gallagher in the case of Seville: I think it is a striking and sophisticated design with nothing “ponderous” about it at all! It stands 9 ½ inches tall and would look great on any mid-century American modern bar. 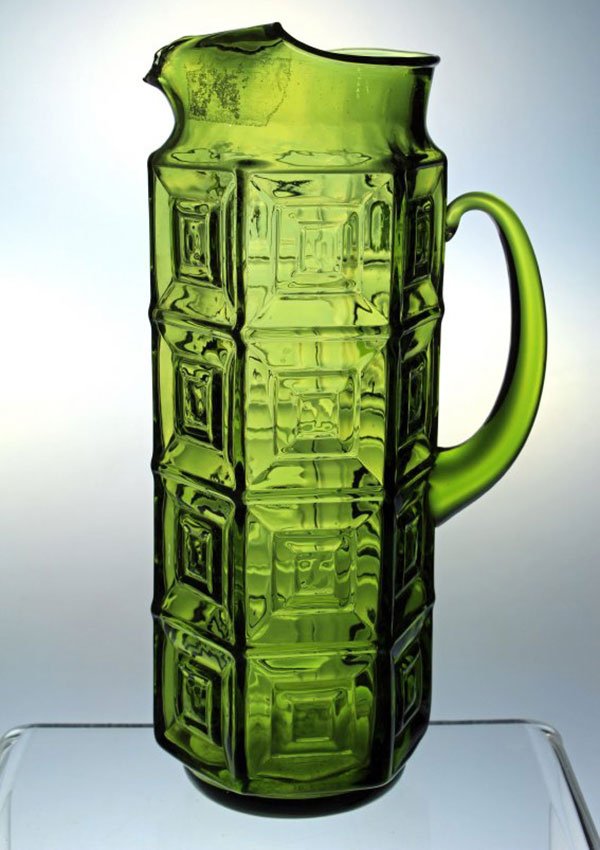