Today’s Museum Monday treasures from the Museum of American Glass in WV are a pair of paperweights by Larcomb and Wicht. Gerald Larcomb and Sally Wicht were a young couple who operated a studio in Marysville, Ohio, from 1977 to 1983, offering stoneware and hand blown art glass. The two paperweights are very different from one another, but both demonstrate the couple’s dedication to traditional styles and design. The first one was made in 1979 and has a clear core with an opaque iridescent exterior with white flowers and brown vines. The second is dated 1981. It is a window paperweight, with a cobalt core with white millefiori flowers. Its exterior is opaque with silver iridescence, with a window cut on the top and four oval windows around the sides. It also has a paper label on the bottom reading: “MINDSCAPE / 8/29/81 / G1257-210.” Mindscape was one of the many galleries at which the couple exhibited their works, with the Toledo Blade indicating that they won an award from them two years later in April 1983.

Unfortunately, this was not a story with a happy ending. Two months later an obituary announced Gerald Larcomb’s “sudden” death at the age of 34. Tom Fuhrman, the well known glass artist, responded to a request for identification of one of their works on a glass message board in 2013, reporting that Gerald had committed suicide “and that was end of their glassmaking as far as I know.” MAGWV is proud to have two examples of their talent. 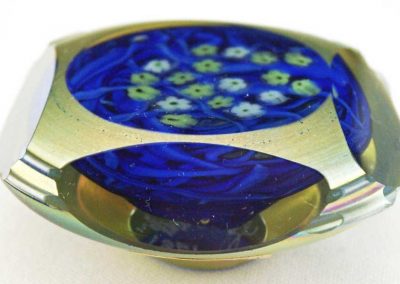