Today’s Museum Monday treasure from the collection of the Museum of American Glass in WV is a stock certificate from the International Glass Company in Millville, New Jersey. It for 3 shares of preferred stock at par value of $100 in the International Glass Company, sold to Edwin B. Garrigues, dated on the eleventh day of March 1920. The certificate is signed by Howard F. Towner, Treasurer, and L. H. Wood, President.

Millville, N. J., has long been a major glass manufacturing area, but I have to admit that the International Glass Company was unknown to me before we acquired this bit of memorabilia. They made chemical glass tubing and vials, with the first of their Millville factories erected in 1914. They ultimately ended up operating three factories. They seem to have hit a peak during World War I, with a newspaper article from 1916 reporting that Mr. Wood’s predecessor, “H. K. Mulford, head of the antitoxin laboratories and president of the International Glass company, Millville, N. J., points to developments at the International plant, in volumetric and lamp-blown ware, in less than a year as illustrating the possibilities for building up an industry to care for the American demand formerly supplied almost entirely by Germany.” Another newspaper article from 1918 spoke of the company “being rushed with orders” and went on to say, “Much of the ware is being used in vials and chemical purposes in the army.”

A report in October 1918 resonates with us today, talking about the factory having been shut down for two weeks, “caused by so many of the workmen being stricken with influenza.”

Other newspaper items give us a sense of what life was like at the factory: “The revival spirit is continuing in Millville. The International Glass Company has made it a practice to have Thursday noon religious meetings and the Millville pastors have been invited to speak” (1915). “The International Glass Company of Millville is completing a fireproof building entirely for the comfort and convenience of its workers. A tennis court and baseball diamond have also been laid out” (1916). “This company has furnished bath rooms, shower baths and lockers for clothing for the men who wish to have the advantage of a dressing room before and after work hours” (1917).

After the War time boom, however, things seem to have begun to go downhill. In April 1920, shortly after Mr. Garrigues bought his 3 shares of stock, the company closed temporarily due to a lack of coal and other material due to a railroad strike. But the big blow fell in March 1924: “With liabilities of $22,934.38 and assets of $109,134.29, the International Glass Company, of Millville, has been thrown into bankruptcy on the petition of creditors.” Four months later, in August 1924, the factory and all finished and unfinished stock, as well as office equipment and machinery, was sold at a trustee’s sale. 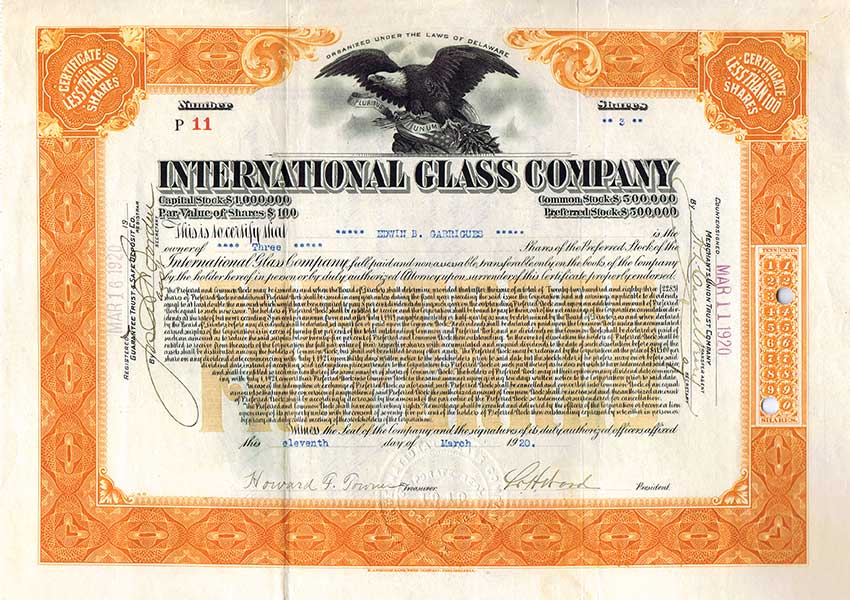