Today’s Museum Monday treasure from the Museum of American Glass in WV is an Indiana Glass Company barrel creamer in the No. 1514 pattern. It is part of a group of Indiana Glass Company factory samples acquired by the Fenton Art Glass Company when they bought the Indiana moulds. MAGWV in turn was able to purchase many of these samples in 2011 after Fenton closed. In addition to the blue creamer, we also acquired a set of both the creamer and sugar in crystal. The latter are marked with the pattern number in red grease pencil and also have Indiana labels. So, now we knew the who and the what. But we didn’t know the when!

To date, we have been unable to find this set in any of our Indiana catalogs. However, we have a clue: the single creamer in horizon blue suggests a production period in the 1970s or 1980s and, further, made us wonder if it might have been made for Tiara Exclusives in this color. And indeed! There it was in Tiara’s fall 1975 catalog, but with the set listed as No. 10024, with the change in pattern number pretty good evidence that it was a reissue rather than a Tiara original. The set continued to be offered until 1977, but is crossed out, indicating that it had been discontinued at some time before the 1978 catalog came out. Mystery at least partly solved! 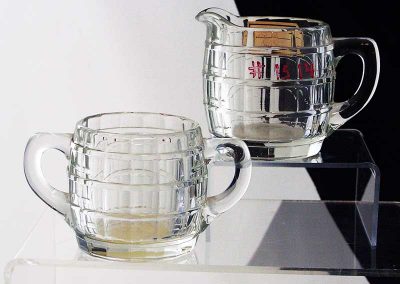 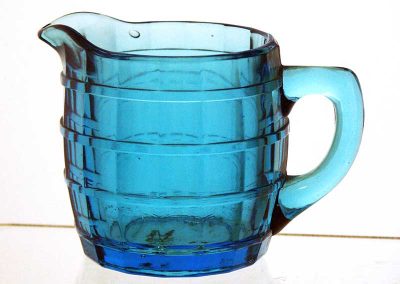