Today’s Museum Monday treasure from the Museum of American Glass in WV is a Five Fruits sherbet from the Consolidated Lamp and Glass Company’s Martele line. This was one of a group of patterns that were Consolidated’s answer to Lalique and other French glassware lines that had proven popular with the high-end market for imported glassware in the 1920s. Prior to this, Consolidated had primarily been a manufacturer of lighting goods, so this was advertised as a significant departure for the company. As reported in The Pottery, Glass & Brass Salesman in their January 28, 1926, issue: “The die work is noteworthy in its detail. The designs are pleasing, many of them being classic, while others are of a modern type. The color effects, too, are worthy of special comment. They range from the most delicate shades of pink and old rose to amber, russet, turquoise and jade green. The glass is translucent and the surface shows a lustre or iridescence that is characteristic of old bronze.”

We have examples of Five Fruits in pink and green. We also have two of the pound candy boxes, one with a brown wash and the other with over-all paint, giving a suggestion of how remarkably different the same piece can appear, depending on the decoration.

Famed designer Reuben Haley was responsible for the establishment of Consolidated’s Art Glass Division. Pieces in the Martele line continued to be made until 1932, but ceased due to the temporary closing of the factory under financial stress caused by the Great Depression. Although some moulds were then used by the Phoenix Glass Company until Consolidated re-opened in 1936, I don’t know if Five Fruits was among the ones that were made in these later years. 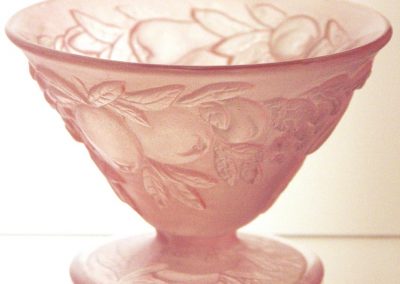 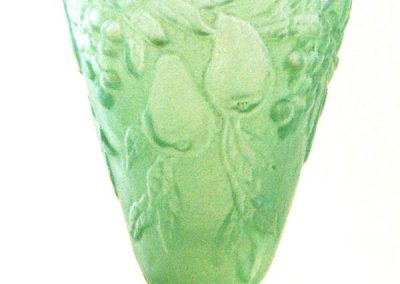 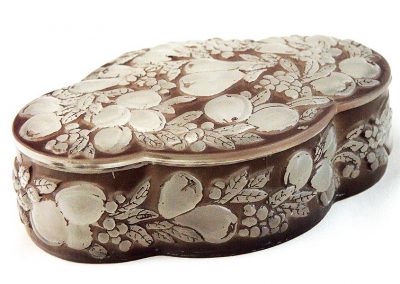 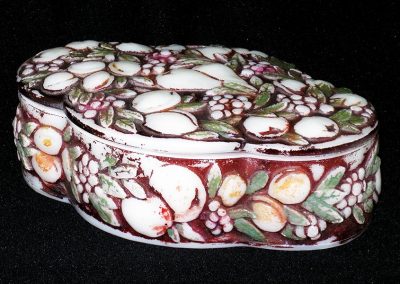