Today’s Museum Monday treasure from the Museum of American Glass in WV is an unusual candlestick, but one that is easily recognized by Cambridge glass collectors as part of the Everglade pattern. Easy, right? Well, maybe, maybe not. It turns out to be a bigger puzzle than I anticipated when I chose it for today’s treasure.
To begin with, the pattern has a complicated history. This candelabrum (as Cambridge called it) and a similar one-light candlestick were announced as new in 1931 as part of Cambridge’s Leaf Line. This seems to have been a very limited grouping, with only the two candle holders shown in the 1932 catalog supplement, available with or without insert vases (or flower holders). A year later, the bowl seen in the second photograph appears in a 1933 supplementary page. It is 10 ½” wide and 5 ¾” high, so quite a substantial piece of glass. The candelabrum is identified as No. 1211 and the bowl as No. 1207.
Curiously, just a few pages later in the same supplement, seven new pages appear that now call the pattern Everglade, with the candelabrum as No. 3 and the bowl as No. 1. Okay, I can live with that since the pattern is now substantially larger with dozens of pieces available. One of the added items is a very large No. 28 bowl, 16” in diameter, portraying Indians hunting buffalo. I’m not sure how this fits with the Everglade theme (buffalo in the Everglades?), but it is probably just as logical as the Swan bowls and the various floral motifs that were also brought out at this time.
The next development doesn’t happen until 1941-1944, when the pattern becomes Arcadia, with the candelabrum (now just called a candlestick) listed as No. 75 and the bowl as No. 161. Once again, the line was expanded with Will Cameron McCartney taking out four design patents for some of the new pieces. And as seen in the advertisement clipped from Better Homes & Gardens, May 1943, the ad copy emphasized how new and original these designs were. (Huh? Okay, so some of them were new, which I guess gave them poetic license . . .)
“Leaves of Ice Crystal Engrave Their Beauty on New and Lovely Shapes . . Latest expression of America’s supremacy in glass-making, Arcadia combines freshness and originality of form with an entirely new decorative treatment of finely engraved leaf patterns which give matchless sheen and brilliance to the crystal. Select from more than 50 open-stock pieces – newly displayed in good stores everywhere at prices genuinely modest.”
So that brings us back to the candlestick that began this discussion. It appears to be in forest green, a color that was introduced in 1944. However, according to all of the documentation we have, Arcadia was only made in crystal. Was this a piece they just tried out for the heck of it in green? Or . . .
Well, before we get to the “or,” let’s trace the final disposition of the Leaf Line/Everglade/Arcadia moulds. They went first to the Imperial Glass Corporation, who issued a number of pieces in the 1970s, mostly with carnival finishes. After Imperial closed some of the moulds made their way to the Summit Art Glass Company. The final three photographs show scenes around the sides of an incredible caramel slag bowl. Summit advertised this bowl in 1987 as the Indian-Buffalo Hunt bowl – yes, made from the mould for the large bowl mentioned previously. It is punch bowl size: 14” in diameter and 6 ¾” high. (It cost $65.00 new, so it is unlikely to have sold in great quantities.) Summit made other pieces from the Everglade pattern in various colors, including a comport in malachite green — which is their name for a color that almost perfectly matches forest green. Ah! Now you see where I’ve taken you. So, is this candlestick Cambridge or is it Summit? Perhaps we’ll never know for certain, but I strongly suspect Summit at this point. And whatever it is, it certainly is wonderful! 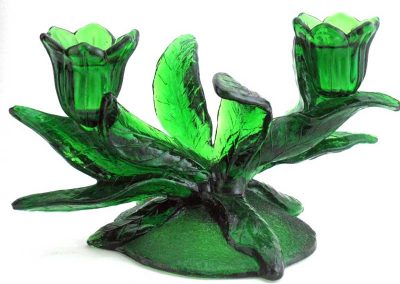 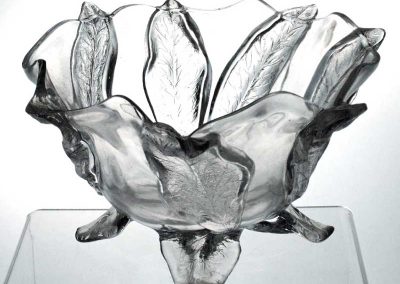 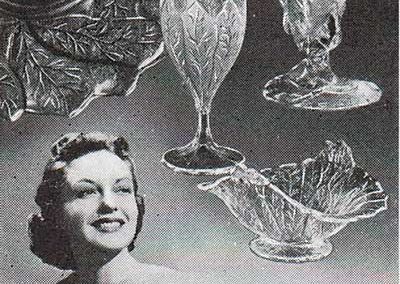 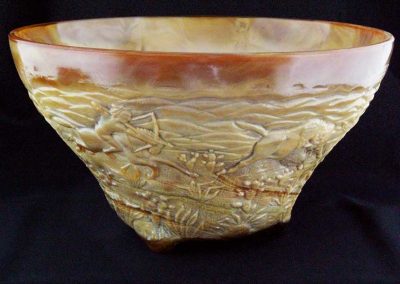 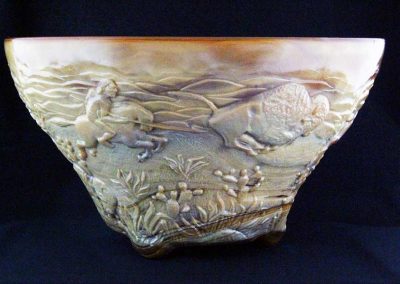 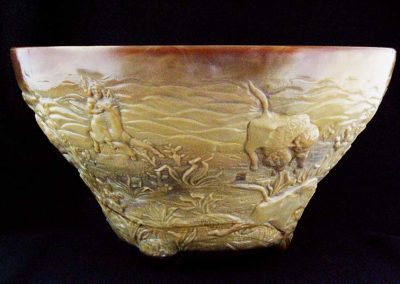 Today’s Museum Monday treasure from the Museum of American Glass in WV is a pair of No. 3600/579 12 oz. tumblers from the Anchor Hocking Corporation. The first is a black screen-printed design of bottles and stemware with overlay of plum in the Anticipation pattern,... 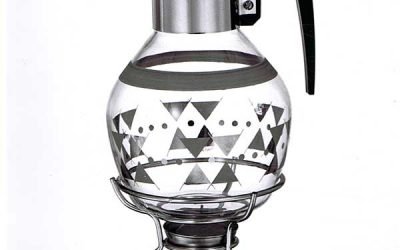 Today’s Museum Monday treasure from the Museum of American Glass in WV is a small collection of photographs from our archives featuring Mid-Century American Modern barware and serving pieces from the Gay Fad Studios. The first five are in the Time ‘n Tide (or TNT)... 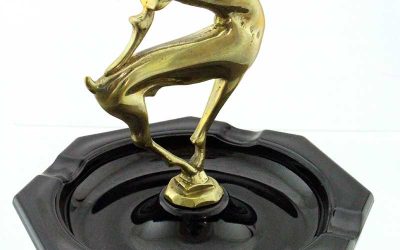 Today’s Museum Monday treasure from the Museum of American Glass in WV is a HouzeX Glass Products No. B-10 octagon ashtray in ebony, with a wonderful brass art deco impala figurine. Houze Glass operated in Point Marion under a variety of different names over the years...