Today’s Museum Monday treasure from the Museum of American Glass in WV is an advertising piece for a form of glassware that I don’t imagine many of us collect today: the tubes that used to be found in our television sets, back before flat screen TVs became the newest innovation. This is a shallow round tray embossed with: “Corning Glass Works Television Bulbs Mean More Profit for You” with the Corning logo and a graphic of a TV tube in the center. It is fairly large, 5 inches in diameter.

Corning was involved with television almost right from the beginning as can be seen in Figure 2, an advertisement from around 1939, appearing in the Fortune Round Table. The ad copy tells a dramatic story:

“THE men in the pitch black laboratory grew tense. Suddenly, somewhere in the dark an electric motor began to whine. And across a little ground glass screen flickered for an instant a grotesque squared-off image of a cat.

“That was television in its infancy. Oddly enough, practical experiments in this field preceded by several years the first successful use of wireless telegraphy by Guglielmo Marconi in 1895.

“For years television remained simply a “laboratory toy”. But this summer when you go to the New York or San Francisco Fair you can see it in operation. You can, if you wish, select one of several makes of receiving sets for use in certain areas where television programs are regularly broadcast.

“Experimenters in television have followed in the steps of Thomas A. Edison who nearly 60 years ago turned to Corning for a thin glass bubble for his first electric lamp. Out of Corning’s experience in making bulbs for lamps and radio tubes, have come many helpful developments in the unusual shaped bulbs required in television receivers and cameras.“

The ad in Figure 3 from a 1953 issue of National Geographic, tells more of the story:

“How the World Series got into millions of living rooms.”

“IF YOU are ever faced with a sudden need for lots of things for some new product, remember the production miracle behind your TV set.”

“In 1946, the nation was hungry for television. But only nine thousand 7″ picture tubes were produced for the entire industry. No one knew how to produce–in volume–glass parts of the required size, shape and quality.

The problem was brought to Corning Glass Works. To find the solution, Corning had to develop a new glass … had to improve controls … had to build new machines … had to invent wholly new manufacturing methods. This included a revolutionary, new spin-casting process which swirls molten glass into odd shapes accurately, fast, and at reasonable cost.

“To keep up with mounting demands, Corning built a completely new plant and wholly revamped another. As a result of this program, Corning continues to be a major supplier of the TV industry which this year will require–and get–about eleven million picture tubes, many of them as large as 27″.

What this means to you is as clear as Corning’s optical glass. Corning research and manufacturing are ready to apply to your problem the same skill and effort which speeded the growth of television and many other industries.”

The press photograph from our collection in Figure 4 shows the Corning Glass Works plant in Albion, Michigan. A typed caption appears on the verso: “Corning Glass Works makes glass bulbs for television tubes.” It is date-stamped July 23, 1959.

And another image, seen in Figure 5, is a postcard of the Corning Charleroi plant. The caption on the verso reads: “Charleroi, PA — Corning Glass Works — At one time, there were 5 glass factories in Charleroi. This plant, originally Macbeth lamp chimney works, became part of Corning in 1936. Electric light globes, headlight lenses, glass block, Depression Glass dishes, pyrex products, television picture tubes, the tile for the Holland Tunnels, and the Panama Canal lighthouse lenses were made here. A multi-million dollar addition where Corelle Ware is made was dedicated March 3, 1990.” 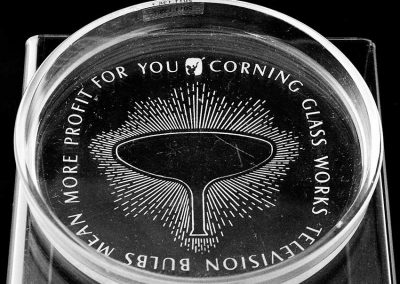 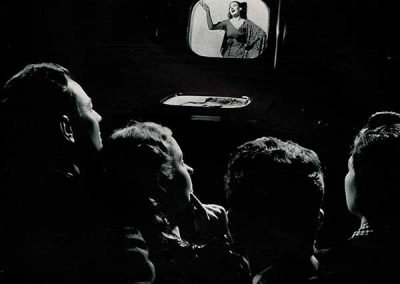 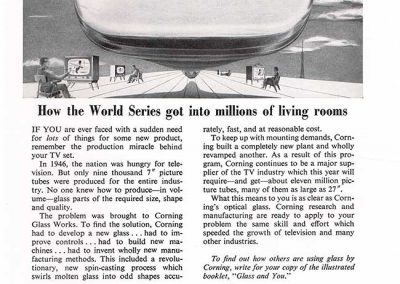 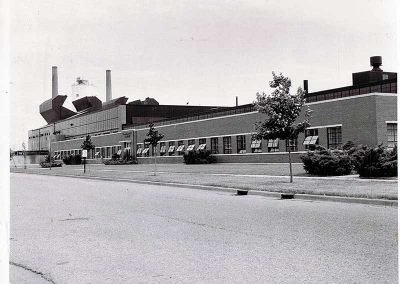 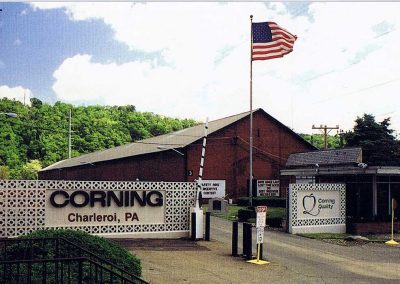